The book is coming soon in multiple languages so that all our readers can get their copies in their own language to understand it completely. 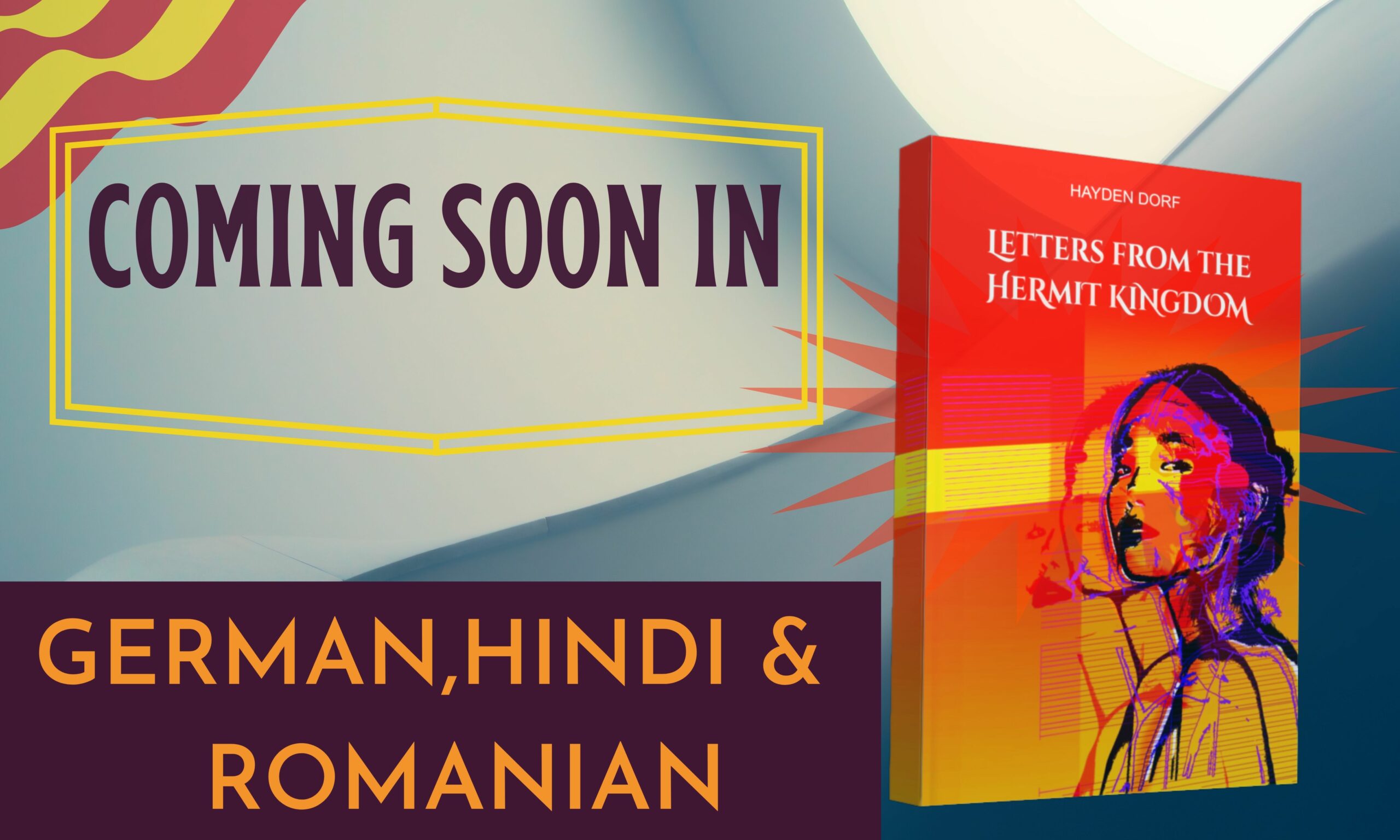 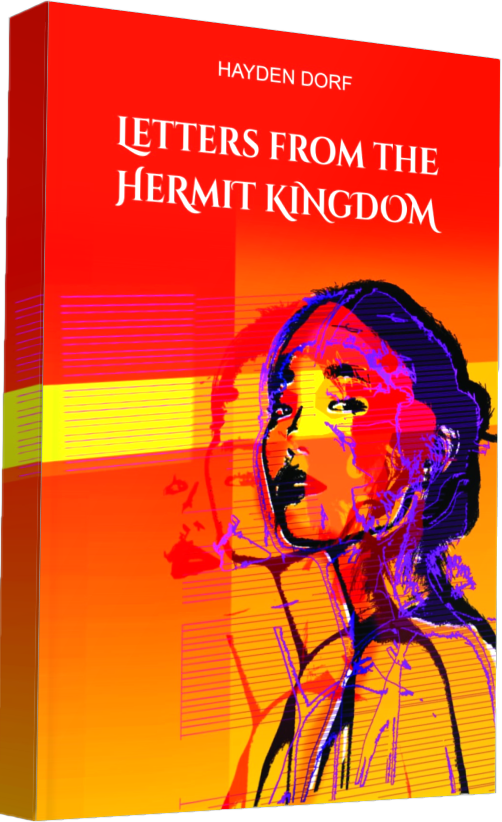 Hayden Dorf, the author of the Letters from the Hermit Kingdom, is part of the generation who made their debut at the beginning of the millennium. In search of his own artistic individuality, he initially found himself in the lyrical register, publishing several volumes of poems. Letters from The Hermit Kingdom is his first novel. Already translated into several languages, the book highlights a formula for individualizing expression. He dared to assume a literary code placed under the sign of aesthetic emotion, of a cult for beauty and love, in a period rather dominated by aggressive postmodernism.

What is life like in North Korea? This is a question that each of us has probably asked at some point. This book provides an answer. And not only that.

Alex Robinson, a young American participating in an international event in South Korea, is kidnapped by North Koreans while visiting the demilitarized zone (DMZ) on the border between the two countries. Victims of the forced action are, along with him, a sergeant from the South Korean army and a young man from India. The Pyongyang government claims special conditions at their participation in the Winter Olympics in exchange for the prisoners. The sergeant, seriously injured in the explosion while saving Alex’s life, asks him to send some letters to his fiancée and dictates an astonishing will, the contents of which the American would find out only after being released. Meanwhile, Alex, also injured in the explosion, falls in love with the young North Korean Kim Hyo-Ri who provides them with medical care.

What will be the fate of their fascinating love story? Will Alex survive and escape the Hermit Kingdom? And what do those letters contain to make the front page of South Korean newspapers?

Let’s find out the answer together. Buy Letters from The Hermit Kingdom now and enter the heart of this story full of suspense, mystery, political intrigue, and, above all, love. Enjoy!

The Most Beautiful Letters Ever Sent From The Hermit Kingdom

Last night harassed me for a long time. Sleep was not coming; it was also caught between the sheets of the window. Lately, pain and helplessness are the mirrors that show me my right dimension, my humble and insignificant self. Only now I understand that man is not a peacock, whose wings hardly fit in the pew of the church. Sometimes I feel all the long clouds pass through me, like jagged and ruthless edged strips. I stare in vain, in silent despair, at the hospital window. The fire of my eyes does not penetrate it. I have nothing to do with the outside world. All I have left is the sky that my mind can build, untouchable for everyone else. I find there an unprecedented force which brings me very close to you. Look out the window, you’ll see the city as I describe it to you now, in the evening, essences of nard descend over the soul of Asia from Namsan Park. No one ever walks alone by the Banpo Bridge. All around me, lovers look like long filaments searching for signs on the Han river. Only I, solitary, count the violins and the lips of the night. I tell myself, full of hope, that we will get back together someday to caress the thighs of the rainbow fountain. I fall asleep late, innocently, with the night’s husks in my hands. I dream again in solitude, but I look towards you …

Get Your Copy Now

The little, faded blue, neat house at the end of Sungion street in the old town of Kaesong has remained a mystery to everybody, including neighbours. Nobody knew who lived there, although several people were seen going in and out almost daily. On the other hand, it’s also a fact that nobody asked questions. It was enough to know that Major Pak Seong-Ho frequented the house and all curiosity was ultimately cut short. A local man, from a very influential family of high- ranking military from the North Korean army, the former brilliant student had been selected since his studies for one of the highly paid positions in the cybernetic army, given his excellent performance and his social rank, and belonging to the core . At present, he was one of the young leaders of Kaesong’s Security Committee, a local branch of the Ministry of State Security. That is, those who investigate internal espionage cases, are in charge with the repatriation of deserters, of the detention camps and needless to say, lead the counterintelligence activities from abroad.
It was already dark when Kim Hyo-Ri rang the bell of the blue house with the high fence and windows a bit too large for such an old building. Nevertheless, the windows were always covered. She was asked to come only after dark. She knew the house well; she had already been called several times there. One of the four rooms was always ready for Major Pak. A big desk, one table, two armchairs, a wardrobe and a huge bookcase that nobody could touch without his consent, were stacked in less than twenty square meters. Next to it, there was a room with two soldiers. They could leave the house in turns only on special occasions. There was another room used by Chang Da-Eun, a woman good at everything, who was in charge of cleaning, washing, cooking and other household chores. The most spacious room, the infirmary, was not always occupied.
But on that day, two beds were full of blood, and Chang Da- Eun passed her mop the second time under them. She watched every time if the two were awake. When she reached the third bed, her eyes avoided the frightened look of the stranger, but lingered on his face and clothes covered in black dust.
The major was in his office, waiting for Kim Hyo-Ri, when the voice on the phone made him shiver:
“What are you going to report, Comrade Major Pak?”
“The extraction went well. However, there were small complications. Two are injured, one of which seems to be quite serious.”
“Two? How many are they?”
“Three. Two young civilians and a sergeant from the Southern army. The soldier and one of the other two need immediate medical care“.
“You are aware of the fact that for now everything is secret, and while so, I can’t offer you anything, not even medical care. You’ll have to deal with it on your own. We’ll see later what we can do.”
“Yes, comrade.”
“Comrade major do not forget, I need them alive, otherwise all your efforts will prove useless. And my gratitude can quickly change into something else…”
Hyo-Ri had been called urgently and as soon as she arrived, one of the soldiers led her to the major’s office.
“Good evening, Hyo-Ri. Please take a seat. I have received two wounded men today. Three, in fact. But the third seems to have only superficial injuries. But the other two, I don’t know exactly their condition. One of them is a southern army soldier. The other could be American or European, I guess. None of the two have regained consciousness, yet. I’d like you to consult them and tell me what their condition is and what exactly you would need for their treatment. In case any of them regain consciousness and can talk, you’ll let me know immediately. They are not to be told anything without my consent. We’ll proceed as always, every time somebody new enters their room, other than the soldiers, we’ll blindfold them.”
“Certainly, Comrade Major, everything will be as you wish. “
“Hyo-Ri, we have already had this discussion too many times. When it’s just the two of us, you can call me by name. I do not stick to the military etiquette with you.”
“Please forgive me, Seong-Ho. You are right, but I’m not used to it yet.”

The Audio Book is Available Everywhere.

Update Required To play the media you will need to either update your browser to a recent version or update your Flash plugin.